What if the air you breathe out could indicate your state of health? And if the analysis of this air could make life easier for patient with diabetes or indicate which diet to follow. We are no longer  far from this truth. Several devices are being developped to offer accessible and personalized health monitoring solutions.

Nutrition: What if the answers were in the exhaled air

Existing methods of diet monitoring are sometimes restrictive and difficult for a consumer to follow. It is necessary to evaluate the amount of food consumed, to inform all meals, to calculate the time and the level of sport.

Lumen offers a solution combining an exhaled air analysis tool and an associated mobile application to monitor metabolism. Each person has his own metabolism that can vary every day depending on what he eats. 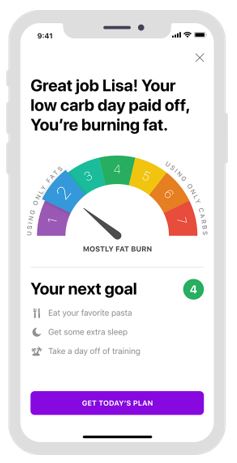 The concept is simple, blow into the device every morning to find out if your body is burning carbohydrates or fats instead. The application then proposes daily menus adapted to the current metabolic state. Lumen offers a nutritionist at hand. The person knows what to eat and when in order to achieve weight loss and fitness goals. They can also test their metabolic activity before an effort to find out if a carbohydrate-rich or non-carbohydrate-rich snack is necessary.

The mechanism is based on a measurement of the CO2 concentration in the exhaled air. When the body consumes carbohydrates, it produces more CO2 than when it burns fat.  Lumen’s teams worked for 4 years to develop a respiratory process that would allow accurate and rapid measurement of this gas concentration. Even if this respiratory analysis is known among global athletes for improving performance, some scientists remain cautious about the validity of the Lumen system even if they recognize that any tool that motivates a person to take care of their health is beneficial.

The startup has raised more than $2 million on the Indiegogo participative platform and is expected to deliver its first products in July 2019. 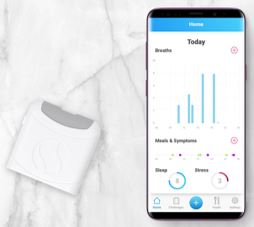 Many people have digestive difficulties and it is often difficult to know if digestive discomfort is due to a particular food.

Foodmarble has developed a breath tester that can determine whether the food ingested is compatible with the individual’s digestive system. Here we are interested in the level of hydrogen in the exhaled air. Indeed, when food is not completely digested, it arrives in the large intestine where it undergoes bacterial fermentation to produce this hydrogen.

Health: your breath can monitor and detect certain diseases

At CES 2019, Aernos, a manufacturer of gas nano-receptors, announced its collaboration with the Aerbetic startup to create a diabetes surveillance system.  They propose to use gas detection technology to identify glycemic status in a non-invasive way. A watch or pendant equipped with sensors will detect the presence of gases characteristic of a state of hyperglycemia or hypoglycemia. Intended mainly for type 1 diabetics, this device will allow remote patient monitoring. Thanks to the complementary application, caregivers are alerted to a possible suspicious event. This product is expected to be on the market in 2020.

For several years, dogs have been used in health, particularly to detect certain diseases. Their sense of smell is particularly developed, which allows them to detect a metabolic situation based on smell alone. A study tested breast cancer screening in 130 women through dog training with a 100% reliability rate. This is what scientists are trying to reproduce artificially.

The Na-Nose project is one of the most important. A team of Israeli researchers from Technion University is developing an artificial neon made up of electronic nanosensors. At the present time the device would be able to detect 17 diseases such as lung cancer, neck cancer, multiple sclerosis or Parkinson’s disease with an accuracy of 86%.

The Israeli team has been working on the Na-Nose project since 2007 and wants to make this technology accessible to everyone, not just large hospitals. It may soon be possible to carry out all its screening in local doctors. The launch of this product is planned for 2020.

French teams are also working on the creation of a “super nose“. But we are no longer talking about electronic receptors but about a real olfactory receptor isolated from the rat, the second most powerful nosed animal. The olfactory proteins are collected and reproduced before being grafted onto an electronic system that will highlight suspicious odours.

In the same vein, the Grenoble startup Aryballe Technologies is working on a simplified version of this nose using peptides. Their methods have already made it possible to develop the recognition of more than 150 smells. The start-up has raised more than 3.1 million and hopes to eventually offer a medical screening tool. They will start with the detection of bacterial diseases that emit a stronger smell.

These technological innovations require many years of research and solid scientific evidence. We can expect to see in the coming years new players positioning themselves on this air analysis technology. This could eventually revolutionize methods of disease prevention and screening.